The problem is, if you simply copy the cells, the pattern isn't continued. Instead, the formulas are adjusted based on the target cell's relation to the source cell. Thus, if you paste A1:A3 into A4:A6, then A4 will contain =Sheet1!B7, which is not what you want. (This happens whether you specifically copy and paste or fill the cells by dragging the fill handle.)

There is no way to continue a pattern while copying a formula. Instead, you need to revisit how you put the formula together in the first place. For instance, consider this formula:

What is returned is the value at Sheet1!B4, just as originally wanted. When you copy this formula down the column, however, the ROW function returns something different in each row. In effect, the ROW function becomes a way to increase the offset of each formula by 14 rows from the one before it--just what you wanted.

You can also use a slightly different approach, this time using the OFFSET function:

This formula grabs a value based on the row in which the formula is placed (again, using the ROW function) and offset from cell Sheet1!B4. Placed into the first row of a column and then copied down that column, the formula returns values according to the pattern desired.

Another approach is to create the desired formulas directly. You can best do this by following these steps: 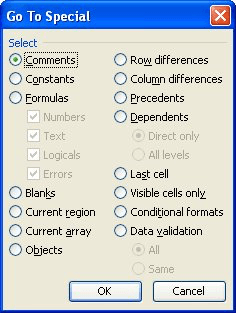 The result is that you end up with only the formulas, with the pattern desired.

Getting the Name of the Worksheet Into a Cell

Excel allows you to change the names assigned to the worksheets in a workbook. If you want to have those names appear in ...

You can use the naming capabilities of Excel to name both ranges and formulas. Accessing that named information in a ...

Putting Bold Words in an Index

There are several ways you can create an index in Word, but the first step is always to figure out what should go in the ...

Edit a group of workbooks at the same time and you probably will find yourself trying to copy information from one of ...

When you copy a formula from one cell to another, Excel normally adjusts the cell references within the formula so they ...

When creating a workbook, you may need to make changes on one worksheet and have those edits appear on the same cells in ...

you just made my day!
I was looking for this solution left right and center and the only way other people managed to do it was by macro.

The best tricks are always in the comments...

I needed to do almost the opposite. I needed the formula to increment by 1 every 22 rows, leaving the 21 rows between blank. I used a modification of the formula above and it worked great. Here is what I used:

The information was in column "J".

The "IFERROR" portion handles the error received when the resulting row calculation is not an integer and puts a blank in that cell.

Hope someone finds this useful. I have been looking for this solution for a while, but today I really needed it.

Probably you can only do it by using a macro. Here is a small one that will do the job:

How do you reference a sheet in a pattern of threes? Like this:

I have thousands of rows I need to autofill for & cannot do this by hand.

This solved the exact problem I was having. I spent a good 10 min trying to understand the formula once I put it in excel because I didn't see the explanation below hahaha. You are quite simply a genius. To thank you I clicked on every ad on your site a good 20 times a piece.

How can I use this for every nth COLUMN instead of ROW?

Essentially, I am trying to retrieve data from every 9th row (11, 20, 29 ) in a range of cells in 1 column, which I think is very similar to the example you've given, I just can't seem to make it work.

Thanks for this post, just had 1 question - in the formula below what is the function of the (+4)?