Please Note: This article is written for users of the following Microsoft Excel versions: 97, 2000, 2002, and 2003. If you are using a later version (Excel 2007 or later), this tip may not work for you. For a version of this tip written specifically for later versions of Excel, click here: Forcing a Worksheet to be Protected Again.

Forcing a Worksheet to be Protected Again

There are several ways you can go about solving this problem. If you've assigned a password to a worksheet, then you simply need to make sure that the same password is used to re-protect the worksheet when the workbook is saved. This is easily done by using a macro that can be tied to the BeforeSave event. This macro should be added to the ThisWorkbook object:

Of course, this approach means that it is possible that a worksheet would not be protected again, if the user chose to not re-protect it.

Starting with Excel 2002 you can actually protect individual ranges of cells within a worksheet. Follow these steps: 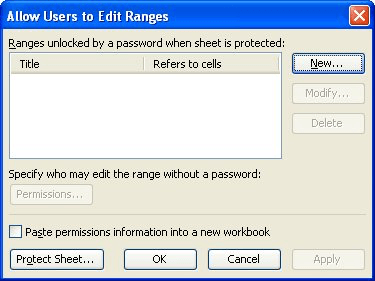 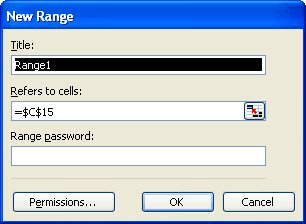 There is only one thing you need to remember when you protect your worksheet (step 9). Since you've not unlocked any cells, then all cells in the worksheet will be protected. You need to make sure that the protection you apply allows locked cells to be selected. If, after the worksheet is protected, a user tries to edit a cell that is in the range you specified in step 4, they are asked for the password you specified in step 5. When they provide it, they can make edits to any cells in the range.

ExcelTips is your source for cost-effective Microsoft Excel training. This tip (11972) applies to Microsoft Excel 97, 2000, 2002, and 2003. You can find a version of this tip for the ribbon interface of Excel (Excel 2007 and later) here: Forcing a Worksheet to be Protected Again.

Rotating a Page of Text

Beginning with Word 2000, you can rotate a page of text by using the Far East language support built into Word. This tip ...

Insert a table into your document, and it normally appears aligned with the left margin. Word allows you to indent the ...

Got a workbook that has lots and lots of macros associated with it? Here's a way you can get a list of all of those ...

When you add a new worksheet to a workbook, it receives a meaningful name such as "Sheet4" or "Sheet17." If you want to ...

Identifying the Last Cell Changed in a Worksheet

When someone changes a cell in a worksheet, Excel normally goes along its merry way of keeping everything up to date. It ...