Please Note: This article is written for users of the following Microsoft Excel versions: 97, 2000, 2002, and 2003. If you are using a later version (Excel 2007 or later), this tip may not work for you. For a version of this tip written specifically for later versions of Excel, click here: Specifying a Language for the TEXT Function.

Specifying a Language for the TEXT Function

Mikael uses a Danish version of Excel. If he uses the TEXT function to format dates, as in TEXT(A1,"mmmm, yyyy"), the textual format returned shows the months in Danish. He would like the months returned in English instead, and wonders how he can instruct the TEXT function as to which language it should use.

There are a couple of ways you can approach this problem. The first is applicable if you simply need to display a date (and nothing else) in a cell—simply don't use the TEXT function. You can easily format a cell to display a date in any language; follow these steps: 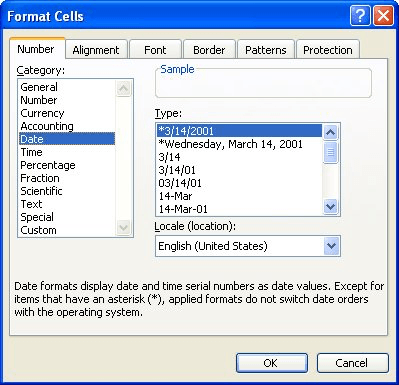 If you are using the TEXT worksheet function because it is part of a larger formula, then you can instruct the function itself to use a different language for its output. You do this by including a language code (formally called an LCID) within brackets, in this manner:

Note that the bracketed code is within the format string, and the code itself is preceded by a dollar sign and a dash. The code is either three or four hexadecimal digits. (Actually, all LCIDs can be expressed in four hexadecimal digits, but if the leading digit is a zero, you don't need to include it.) The example, above, shows how to express results in English, but you can pick any of a wide range of countries:

The inclusion of a language specifier code in your TEXT format will work in at least Excel 2002 and Excel 2003. It may work in earlier versions, as well, but hasn't been tested.

ExcelTips is your source for cost-effective Microsoft Excel training. This tip (3299) applies to Microsoft Excel 97, 2000, 2002, and 2003. You can find a version of this tip for the ribbon interface of Excel (Excel 2007 and later) here: Specifying a Language for the TEXT Function.

Getting Input from a Text File

VBA includes some commands that you can use to read information from text files (non-Word documents). These commands can ...

Word includes tons of internal commands that you can access as you customize your system. One of these is the Normalize ...

Many acronyms (such as DoD) are considered correct when they used mixed uppercase and lowercase. Word may not seem them ...

You can use the CLEAN worksheet function to remove any non-printable characters from a cell. This can come in handy when ...

The process of combining string (text) values to make a new string is called concatenation. Excel provides the ...

Changing the capitalization of text is, believe it or not, a common task in Excel. Common or not, it can be frustrating ...

Hi, on some posts I found out that the letter e replaces the yyyy, jjjj and aaaa etc as a universal code for the (full) year notation: we're trying that out now. It seems to work: would be the best (easiest, most practical) solution for multilingual users, companies, work groups, etc.

I also found another solution which is only using dd and mmm but then leaving the jjjj or yyyy out, and instead using the YEAR function as a separate formula within the longer array. A bit more hassle, but it works, as well. Example (for Spanish, using formulas in English):

I hope this answer finds you and next readers well :-)
I am not sure if it works for languages that don't use/read dd as day and mmm as month: in our case working mostly with English, Spanish and Dutch it works because it's the same letters...

Interesting post and I've used it, too. However a problem has popped up and I can't find anything about it. I hope you can help.

I am the one always coming with improvements to our standard (shared) Excel templates. In the latest version, I used the TEXT function to fill in a travel period automatically: "from 1 October 2019 to 20 October 2019". With the language codes it seemed to be working fine in every language. However, we now found out that the language of Excel (Office) itself, so the locale settings of each colleague, is causing trouble.

Is there some sort of universal character to use?? Thanks a lot, I'm sure there are more people suffering this...