Please Note: This article is written for users of the following Microsoft Excel versions: 97, 2000, 2002, and 2003. If you are using a later version (Excel 2007 or later), this tip may not work for you. For a version of this tip written specifically for later versions of Excel, click here: Generating a List of Macros.

Once you start writing Excel macros, it is easy to get quite a few of them in a workbook. At some point you may want to generate a list of macros in your workbook. There is no intrinsic way within Excel to create a list of macros. You can, however, create a macro that will list your macros. (Sort of sounds redundant, doesn't it?)

As an example, consider the following macro, which steps through all the projects in your workbook to garner all the macro names and place them in a worksheet:

In order to use this macro, you must make sure you have the Microsoft VBA extensibility reference set. To do this, follow these steps: 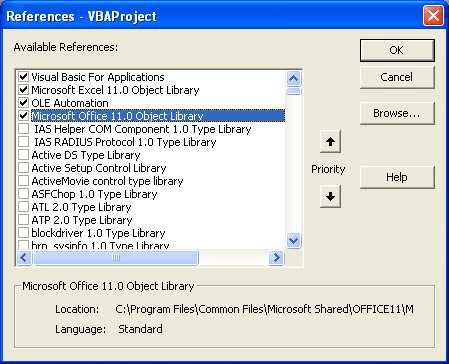 When you run the macro, it adds a new worksheet to your workbook, and then lists the names of all the macros in all the modules in the workbook.

ExcelTips is your source for cost-effective Microsoft Excel training. This tip (2715) applies to Microsoft Excel 97, 2000, 2002, and 2003. You can find a version of this tip for the ribbon interface of Excel (Excel 2007 and later) here: Generating a List of Macros.

For some operations and functions, Excel allows you to use wild card characters. One such character is an asterisk. What ...

If someone sends you a worksheet that has lots of data in it, you might want to "spread out" the data so you can have ...

If you have two characters in the wrong order, you might be interested in a shortcut you can use to switch their order. ...

Macros allow you to perform all sorts of file-related operations. One such operation allows you to delete a directory. ...

Develop Macros in Their Own Workbook

If you develop macros and edit them quite a bit, you may be running the risk of causing problems with the macros or with ...

Workbooks get corrupted from time to time; that's a fact of life in an Excel world. If those corrupted workbooks contain ...

Thanks this is almost exactly what I am trying to do except I want to print the list from my personal macro workbook. Is that possible?

This is great. Your code also taught me the .[a1] syntax.
Is it possible to include additional columns for the shortcut keystroke and the description?
Peter

Just wanted to say thanks so much for sharing this code! I have seen a few that list the macros within a pop-up message box. But that still forces me to manually copy each name into Excel. Having your macro to list all macros is very helpful during my development. I tag each macro as I "version" them and delete all but my final version for each of the macros I write. Then I re-run your code, and use it to create my metric legend and work instructions for any projects I develop. Anyways I love this macro and will use it constantly. But I have one question, is there any way that this macro can be modified to list macros within the ACTIVE workbook, and the new sheet to the ACTIVE workbook, but be run from the PERSONAL workbook. I ask as I have been constantly copying this code into multiple development workbooks from my Personal workbook. Thanks again.