Please Note: This article is written for users of the following Microsoft Excel versions: 97, 2000, 2002, and 2003. If you are using a later version (Excel 2007 or later), this tip may not work for you. For a version of this tip written specifically for later versions of Excel, click here: Automatically Creating Charts for Individual Rows in a Data Table.

Automatically Creating Charts for Individual Rows in a Data Table

David has a worksheet that he uses to track sales by company over a number of months. The company names are in column A and up to fifteen months of sales are in columns B:P. David would like to create a chart that could be dynamically changed to show the sales for a single company from the worksheet.

There are several ways that this can be done; I'll examine three of them in this tip. For the sake of example, let's assume that the worksheet is named MyData, and that the first row contains data headers. The company names are in the range A2:A151, and the sales data for those companies is in B2:P151.

One approach is to use Excel's AutoFilter capabilities. Create your chart as you normally would, making sure that the chart is configured to draw its data series from the rows of the MyData worksheet. You should also place the chart on its own sheet.

Now, select A1 on MyData and apply an AutoFilter (Data | Filter | AutoFilter). A small drop-down arrow appears at the top of each column. Click the drop-down arrow for column A and select the company you want to view in the chart. Excel redraws the chart to include only the single company.

The only potential drawback to the AutoFilter approach is that each company is considered an independent data series, even though only one of them is displayed in the chart. Because they are independent, each company is charted in a different color. If you want the same charting colors to always be used, then you will need to use one of the other approaches.

Another way to approach the problem is through the use of an "intermediate" data table—one that is created dynamically, pulling only the information you want from the larger data table. The chart is then based on the dynamic intermediate table. Follow these steps: 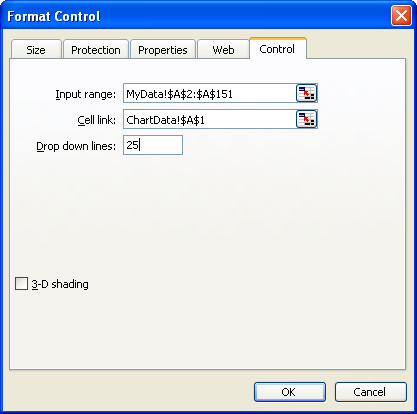 You now have a fully functioning dynamic chart. You can use the Combo Box to select a different company, and the chart is redrawn using the data for the company you select. If you want, you can move or copy the Combo Box to the sheet containing your chart so that you can view the updated chart every time you make a selection. You can also, if desired, hide the ChartData worksheet. 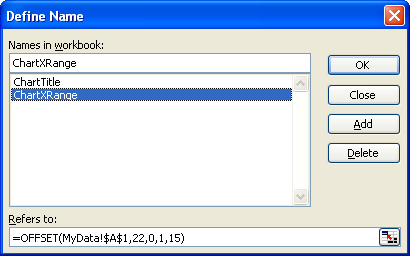 With the names defined, you can select the range MyData!B1:P2 and create your chart. You should base the chart on this simple range, and make sure that you place some temporary text in the chart title. Make sure the chart is created on its own sheet and that you name the sheet ChartSheet.

With the chart created, right-click the chart and choose Source Data. Excel displays the Source Data dialog box, and you should choose the Series tab. Since you based the chart on the headers and a single row of data, there should be a single data series in the dialog box. Replace whatever is in the Values box with the following formula:

Make sure you replace Book1 with the name of the workbook in which you are working. Click OK, and the chart is now based on the named range you specified earlier. You can now select the chart title and place the following in the Formula bar to make the title dynamic:

Now you are ready to add the macro that makes everything dynamic. Display the VBA Editor and add the following macro to the code window for the MyData worksheet. (Double-click the worksheet name in the Project Explorer area.)

ExcelTips is your source for cost-effective Microsoft Excel training. This tip (2377) applies to Microsoft Excel 97, 2000, 2002, and 2003. You can find a version of this tip for the ribbon interface of Excel (Excel 2007 and later) here: Automatically Creating Charts for Individual Rows in a Data Table.

When programming macros, variables are used extensively. At some point you might want to exchange the values held by two ...

Specifying a Paper Tray in a Macro

If you are using a macro to create your printed Excel output, you may need a way to specify that paper should come from a ...

Sorting data means that you organize it in whatever order you desire. Excel's sorting feature can be used in a variety of ...

Numeric Value and Percentage Value in a Graph Column

Need more than a single data label on a data series? Here's a relatively easy way to get what you need.

If you need a number of charts in your workbook to all be the same size, it can be a bother to manually change each of ...

Moving Groups of Data Labels at One Time

Having problems working with data labels in your charts? That's not unusual; here's an idea of an add-in that could help ...

While there doesn't appear to be any comments made in the past few years, I just came across this and I'm in awe! Thank you so incredibly much for making this available - it has saved me weeks worth of work. I am however running into RunTime Errors (mostly 4605) when the routine is looping through my spreadsheet list. I am simply restarting everything once it fails and restarting the loop from the following record that failed. Unfortunately, it is now failing every few records. I'm not sure what information is needed to diagnose the issue....Windows 10, Microsoft Office 365 ProPlus , all updates to both are current, nothing unique in the workstation build (plenty of Memory and Disk). Are there any obvious things I should be looking at?
Thanks again for the incredible routines!

Agree with Mark - Sparklines are probably the best option here.

Why would charts automatically create a copy of themselves when selected

Another approach that an be useful if you just want a sense for what each row of data shows rather than the fine detail is to use sparklines. These are tiny line or bar charts that sit within a cell.