Please Note: This article is written for users of the following Microsoft Excel versions: 97, 2000, 2002, and 2003. If you are using a later version (Excel 2007 or later), this tip may not work for you. For a version of this tip written specifically for later versions of Excel, click here: Easily Changing Chart Data Ranges.

Excel is great when it comes to creating charts based on data in a data table. The Chart Wizard can quickly identify an entire data table, or you can select a portion of a data table and use the Chart Wizard to create a chart based just on that portion.

One way to do this is with the use of named ranges and several worksheet functions. Let's say that your chart is embedded on a worksheet, but the worksheet is different than the one where the source data is located. On the same sheet as the chart, create two input cells which will serve as "from" and "to" indicators. Name these two cells something like FromYear and ToYear.

On your data worksheet (the one without the chart; I'll call it "Source Data"), the data is arranged with each year in a separate column and a series of cost factors in each row. Start your table in column F and place your years in row 2. Place the cost factors in column E, starting at row 3. Above the years place a capital letter that is the same as the column letter, and in column D place a number that is the same as the row number of the data. (See Figure 1.)

In this example, the chart that is embedded on the other worksheet is based on the data in the rangeF2:I5. There is nothing special about the chart, but the changes you are getting ready to make will make it dynamic, and therefore much more useful.

Start by placing the following formula in cell B1:

This formula provides a dynamic title that you will later use for your chart. Give cell B1 the name addrTitle, then place the following formula in cell B2:

Copy the formula in B2 to the cells B3:B5. The formula returns address strings that represent the desired ranges for the X-axis values and the data series. The actual ranges returned by the formulas will vary, based on the values you enter in the FromYear and ToYear cells on the other worksheet. To make things clearer you can enter some labels into column A. (See Figure 2.)

Now you need to name each of the cells in the range B2:B5. Select B2 and in the Name Box (just above column A) enter the name "addrXVal" (without the quotes). Similarly name B3 as addrCost1, B4 as addrCost2, and B5 as addrCost3.

The next step is to create a couple of named formulas that you can use in creating the charts. Choose Insert | Name | Define to display the Define Name dialog box. (See Figure 3.) 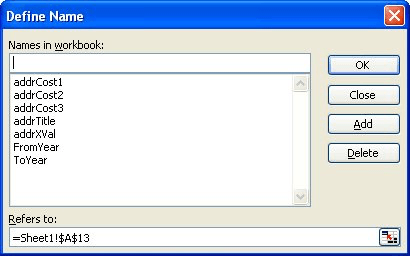 In the name area, at the top of the dialog box, type "rngXVal" (without the quotes), then type the following in the Refers To box:

Using the same dialog box, define additional names (rngCost1, rngCost2, and rngCost3) that use the same type of INDIRECT formula to refer to the ranges addrCost1, addrCost2, and addrCost3, respectively.

Now you are finally ready to update the references in your chart. Right-click the chart and select Source Data, then make sure the Series tab is displayed. (See Figure 4.) 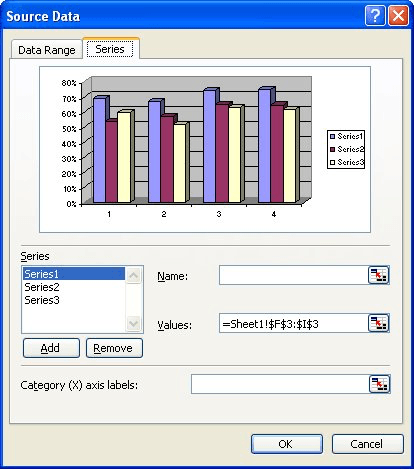 Figure 4. The Series tab of the Source Data dialog box.

Note that you must include the name of your worksheet (Source Data), within apostrophes, in the references you enter. In the Category (X) Axis Labels reference you can enter ='Source Data'!rngXVal.

Once this is done, you can change the starting and ending years in the FromYear and ToYear cells, and Excel automatically and immediately updates the chart to represent the data you specified.

For an extra touch, if you haven't already added a chart title, go ahead and do so. Right-click the chart and select Chart Options, then display the Titles tab. (See Figure 5.) 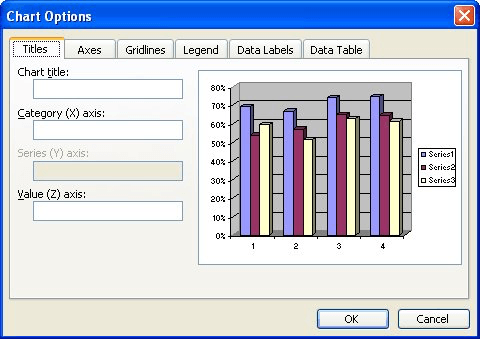 Figure 5. The Titles tab of the Chart Options dialog box.

Enter anything you'd like in the Chart Title box (you'll replace it in a moment), then click OK. The chart title should already be selected, but if it isn't, click on it once. You should see the selection box around the title. In the Formula bar enter the following:

The chart title is now linked back to the cell containing the title string, which in turn is dynamically updated each time you change the FromYear and ToYear values.

ExcelTips is your source for cost-effective Microsoft Excel training. This tip (2376) applies to Microsoft Excel 97, 2000, 2002, and 2003. You can find a version of this tip for the ribbon interface of Excel (Excel 2007 and later) here: Easily Changing Chart Data Ranges.

When you store textual information in a worksheet, it can be helpful to figure out if that information follows a pattern ...

Using one of the page setup options in Word, you can specify that the paragraphs within the section be vertically aligned ...

Changing the Default Location for Saving a Document

When you use Save As, it can be frustrating to be offered all sorts of locations in which to save your file. Fortunately, ...

Automatically Creating Charts for Individual Rows in a Data Table

If you have a lot of records in a data table, you may want to create individual charts based on the information in those ...

Controlling the Plotting of Empty Cells

When creating a chart from information that contains empty cells, you can direct Excel how it should proceed. This tip ...

If you need a number of charts in your workbook to all be the same size, it can be a bother to manually change each of ...