Please Note: This article is written for users of the following Microsoft Excel versions: 97, 2000, 2002, and 2003. If you are using a later version (Excel 2007 or later), this tip may not work for you. For a version of this tip written specifically for later versions of Excel, click here: Referencing the Last Cell in a Column.

Referencing the Last Cell in a Column

The solution to this problem depends on whether you can count on the data in column B containing blank cells or not. If the data is contiguous—it doesn't contain any blank cells—then you can use the following formula in C4:

This constructs an address based on the last cell in the column, and then uses the INDIRECT function to return the value at that address.

If it is possible for there to be blanks in column B, then the following formula will work:

Again, the INDIRECT function is used to fetch the actual value, but the address used by INDIRECT is put together differently.

A different approach is to use the VLOOKUP function to return the value. If column B consists of numeric values, then the following formula in C4 will work just fine:

If column B contains text, then the numeric lookup won't work, but the following will:

ExcelTips is your source for cost-effective Microsoft Excel training. This tip (2103) applies to Microsoft Excel 97, 2000, 2002, and 2003. You can find a version of this tip for the ribbon interface of Excel (Excel 2007 and later) here: Referencing the Last Cell in a Column.

Do you long for a way to reset Word to a "factory default" condition? It is almost impossible to get things to the way ...

Need to get rid of hyperlinks in a worksheet? Here's an easy way to do it without using a macro.

Copying Between Instances of Excel

If you hide the first rows of a worksheet, you may have a hard time getting those rows visible again. Here's a simple way ...

Merging Cells to a Single Sum

One way to make your worksheets less complex is to get rid of detail and keep only the summary of that detail. Here's how ...

Referring to a range of cells on the current worksheet is easy. But what if you want to refer to a range on a number of ...

Thanks so much for the help!

The formula is NOT working! (see Figure 1 below) 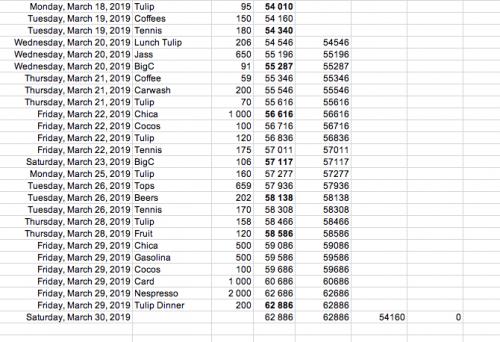