Please Note: This article is written for users of the following Microsoft Excel versions: 97, 2000, 2002, and 2003. If you are using a later version (Excel 2007 or later), this tip may not work for you. For a version of this tip written specifically for later versions of Excel, click here: Contingent Validation Lists.

The data validation capabilities in Excel are quite handy, particularly if your worksheets will be used by others. When developing a worksheet, you might wonder if there is a way to make the choices in one cell contingent on what is selected in a different cell. For instance, you may set up the worksheet so that cell A1 uses data validation to select a product from a list of products. You would then like the validation rule in cell B1 to present different validation lists based on the product selected in A1.

The easiest way to accomplish this task is in this manner: 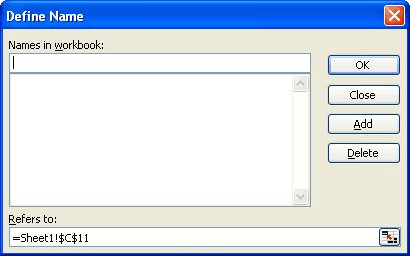 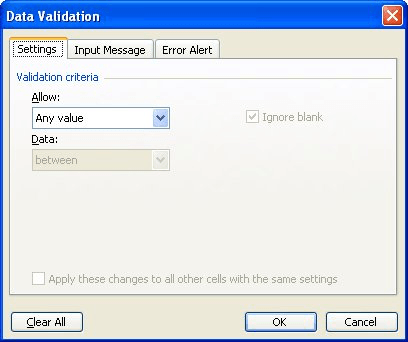 That's it. Now, whatever is chosen in cell A1 dictates which list is presented in cell B1.

ExcelTips is your source for cost-effective Microsoft Excel training. This tip (3195) applies to Microsoft Excel 97, 2000, 2002, and 2003. You can find a version of this tip for the ribbon interface of Excel (Excel 2007 and later) here: Contingent Validation Lists.

If you've added line numbers to your document, at some point you may want them turned off. Here's how to disable line ...

Word includes two different search engines. Which search engine you choose to use will dictate what Word shows as ...

The AutoCorrect feature in Excel is a great tool for quickly entering information. Here's an explanation of the feature ...

Need to get rid of spaces in a range of cells? There are two ways you can approach the task, as described here.

When editing a cell, you may want to cancel the edit at some point. There are two ways to do this, both described in this ...

Forcing Editing to Be Done in a Cell

Excel allows you to edit your cell contents in two places. What if you want to limit where editing occurs, so it can only ...