Please Note: This article is written for users of the following Microsoft Excel versions: 97, 2000, 2002, and 2003. If you are using a later version (Excel 2007 or later), this tip may not work for you. For a version of this tip written specifically for later versions of Excel, click here: Stopping Date Parsing when Opening a CSV File.

Marc has a user at his company who is trying to open a .CSV file in Excel. Some of the numbers in the file are in the format of "2-1" (or something similar). During the import, Excel parses this information as a date. If the piece of data is clearly something outside a valid date range (such as 2-134), then Excel imports it as would be expected. Marc is wondering how his user can force Excel to not parse this data as dates but to import them as text fields.

There at two easy ways you can approach this issue. First is to import the file in the following manner: 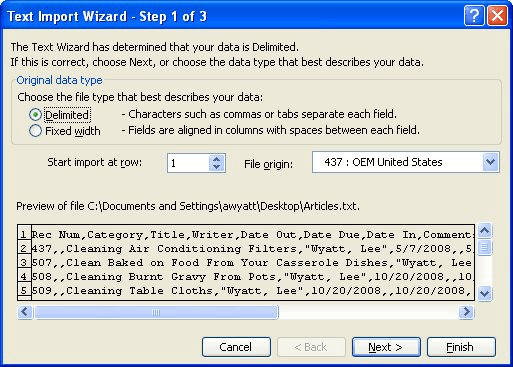 ExcelTips is your source for cost-effective Microsoft Excel training. This tip (3228) applies to Microsoft Excel 97, 2000, 2002, and 2003. You can find a version of this tip for the ribbon interface of Excel (Excel 2007 and later) here: Stopping Date Parsing when Opening a CSV File.

It's easy to apply formatting to text, but often hard (after the fact) to know exactly what was done. If you often need ...

Headers and footers can add a finishing touch to your printed documents. Here's how you can position those headers and ...

A common task when editing documents is to break up run-on sentences. You can make this task a little easier by using the ...

Making Changes in a Group of Workbooks

If you need to change the same data in a large number of workbooks, the task can be daunting. Here are some ideas (and ...

Don't Update Links to Other Programs

If you have links in your workbook to data in other workbooks, you may want to control whether Excel updates those links ...

Want a quick way to see the full path name associated with a workbook? You can add a tool to the menu bar that displays ...