Please Note: This article is written for users of the following Microsoft Excel versions: 97, 2000, 2002, and 2003. If you are using a later version (Excel 2007 or later), this tip may not work for you. For a version of this tip written specifically for later versions of Excel, click here: Repeating Cell Contents.

There are a couple of ways you can do this one is with a formula, using the REPT worksheet function:

This formula repeats the text "12345" ten times. This approach works well if you know exactly how many times you want to repeat the text, but not so well if you don't. This leads to the second approach, which is to use formatting for the cell. Follow these steps: 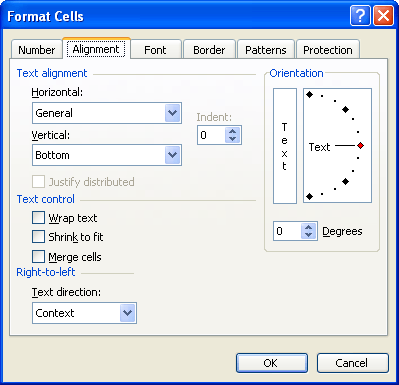 Figure 1. The Alignment tab of the Format Cells dialog box.

The result is that the cell formatting in this way will repeat whatever it contains as many times as it can fit that result into the cell. If the cell is not wide enough to display even one occurrence of the result, then you will see the familiar #### markers. The cell will only display entire occurrences of the result, not partial occurrences. Thus, it will display "1234512345," but not "1234512345123."

If you later want the cell to behave as normal, simply change the formatting to normal by following the same steps and choosing a different alignment setting in the Alignment tab of the dialog box.

ExcelTips is your source for cost-effective Microsoft Excel training. This tip (3214) applies to Microsoft Excel 97, 2000, 2002, and 2003. You can find a version of this tip for the ribbon interface of Excel (Excel 2007 and later) here: Repeating Cell Contents.

When performing a statistical analysis on a large dataset, you may want to use GEOMEAN to figure out the geometric mean ...

Sorting data means that you organize it in whatever order you desire. Excel's sorting feature can be used in a variety of ...

Deleting Everything Except Formulas

Need to get rid of everything in a worksheet except the formulas? It's easier to make this huge change than you think it is.

Need to know the character value of the first character in a string? It's easy to do, without using a macro, by using the ...

When working with text in a formula, you may need to extract the left-most characters from a string of text or from a ...

Specifying a Language for the TEXT Function

You may want to use Excel to display dates using a different language than your normal one. There are a couple of ways ...

hi
I have list in a columnn ,I want to repeat all text in three times as per below example
original data
--------------
Black
Blue
red

please help me out of this..

There are two words that are the same in each cell...I'm typing a list of organizations that all have the same ending in their names. Is there a way to repeat this information and just change the beginning organizations' names?

@segenay,
Would you be kind enough to present, us, a ScreenShot of where you found the "Remove Duplicates" in Excel 97-2003(!) - the versions this tip is, very clearly, referring to ?
Michael (Micky) Avidan
“Microsoft® Answers" - Wiki author & Forums Moderator
“Microsoft®” MVP – Excel (2009-2015)
ISRAEL

Hi Somanka, highlight the values and then go to the data tab and choose "remove duplicates."

Thanks for the message. Sorry about the tardy response!

I did use this method but didn't get anything. It just returned a blank cell.

Thanks again for trying.

@SOmanka,
Suppose your list resides in A1:A9.
In cell B2 (Not B1) type the following array formula and copy down:
=IFERROR(INDEX(A$1:A$9,MATCH(,COUNTIF(B$1:B1,A$1:A$9),)),"")
To confirm an Array formula - use the "three key combination".
While holding down CTRL+SHIFT press ENTER instead of just pressing ENTER.
Michael (Micky) Avidan
“Microsoft® Answers" - Wiki author & Forums Moderator
“Microsoft®” MVP – Excel (2009-2015)
ISRAEL

Hi. My question relates to a somewhat reverse process. Suppose I have the dataset as follows:

Can I use a shortcut?

I have a similar question but related to repeating (coping) the same formula down a column? For example, if I want to see the formula =B2+C2 in cells D2, D3, D4, D5 ... Currently, Excel iterates this formula down the column. For example: