Please Note: This article is written for users of the following Microsoft Excel versions: 97, 2000, 2002, and 2003. If you are using a later version (Excel 2007 or later), this tip may not work for you. For a version of this tip written specifically for later versions of Excel, click here: Segregating Numbers According to Their Sign.

Are you working with a large set of data consisting of mixed values, some negative and some positive, that you want to separate into columns based on their sign? There are several ways this can be approached. One method is simply to use a formula in the columns to the right of the mixed column. For instance, if the mixed column is in column A, then you could place the following formula in the cells of column B:

This results in column B only containing values that are greater than zero. In column C you could then use this formula:

This column would only contain values less than zero. The result is two new columns (B and C) that are the same length as the original column. Column B is essentially the same as column A, except that negative values are replaced by zero, while column C replaces positive values with zero.

If you want to end up with columns that only contain negative or positive values (no zeroes), then you can use the filtering capabilities of Excel. Assuming the mixed values are in column A, follow these steps: 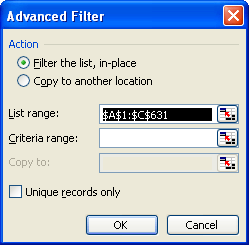 You now have the desired two columns of positive and negative values. You can also delete the cells at E1:E2 if you desire.

ExcelTips is your source for cost-effective Microsoft Excel training. This tip (3198) applies to Microsoft Excel 97, 2000, 2002, and 2003. You can find a version of this tip for the ribbon interface of Excel (Excel 2007 and later) here: Segregating Numbers According to Their Sign.

Viewing Two Worksheets At Once

If you need to work on two worksheets in the same workbook at the same time, Excel makes this rather easy to do. All you ...

There are scores of keyboard shortcuts built into both Windows and Word. If you run into a conflict between shortcut ...

When working with tables, a common editing task is to combine two tables into one. Sometimes, though, you may run into ...

Combining Numbers and Text in a Cell

There are times when it can be beneficial to combine both numbers and text in the same cell. This can be easily done ...

When analyzing your numeric data, you may need to figure out the largest and smallest numbers in a set of values. If you ...

The way you signify that you are entering a formula is to start a cell entry with an equal sign. Here is the reason why ...