Please Note: This article is written for users of the following Microsoft Excel versions: 97, 2000, 2002, and 2003. If you are using a later version (Excel 2007 or later), this tip may not work for you. For a version of this tip written specifically for later versions of Excel, click here: AutoFilling with the Alphabet.

AutoFilling with the Alphabet

Marlene is a teacher and she has students who love word searches. She finds it quite time consuming to make them, but the students seem to remember the course material much better when she uses them. Marlene wondered if there was some way to AutoFill a range of cells with letters of the alphabet, A through Z. That way she can use the feature to fill in the squares of the word search with letters, before she replaces some of those letters with the actual words to be searched.

The AutoFill tool in Excel has a few standard sequences it will fill automatically, such as dates and numeric sequences. The very powerful part of AutoFill, however, is that you can create custom lists that the tool uses just as easily as the built-in sequences. In order to create a custom list manually, you can follow these steps: 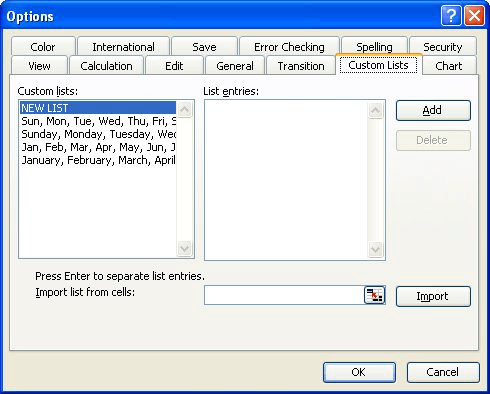 Figure 1. The Custom Lists tab of the Options dialog box.

You've now created your custom list, and you can close any open dialog boxes. To use the custom list, just type one or two letters you want to start the sequence with, select those cells, and use the AutoFill handle to drag over as many cells as you want to fill.

There's another way to create the custom list that may be a bit easier, just in case you don't want to type twenty-six letters in the dialog box. Instead, if you already have the letters of the alphabet in twenty-six cells, simply select those cells and follow these steps:

Now you can close the dialog box and use the custom list as you desire.

Of course, there is one drawback with using a custom list, especially when it comes to creating word searches: the letters added to blank squares are always in a predictable sequence, which could make finding the actual words a bit easier than you want. To make the puzzles a bit more challenging, it would be better to fill the non-word squares with random letters.

One easy way to get random letters is to use the following formula:

The RANDBETWEEN function is part of the Analysis ToolPak, an add-in which many people have installed in Excel. (Choose Tools | Add-ins to see if you have it installed.) If you prefer to not have the add-in enabled, then you can rely upon a more basic formula, such as the following:

The CHAR function should look familiar; the only difference is the use of the RAND function to generate the random value instead of RANDBETWEEN.

If you create a lot of word search puzzles, then you may want to use a macro to fill a range of cells with random letters of the alphabet. There are any number of ways that such a macro could be put together; the following is one that is particularly flexible. It will work with either a pre-selected range (a range selected when you run the macro) or you can select a range after you run the macro.

The macro code, as written, inserts the uppercase letters into whatever range you specify. If you want to use lowercase letters instead, then all you need to do is set the UpperCase variable to False rather than True.

ExcelTips is your source for cost-effective Microsoft Excel training. This tip (3109) applies to Microsoft Excel 97, 2000, 2002, and 2003. You can find a version of this tip for the ribbon interface of Excel (Excel 2007 and later) here: AutoFilling with the Alphabet.

If you want to print a list of the AutoText entries on your system, you can do so quickly by making one change on the ...

Excel allows you to define names that can refer to either ranges of cells or to constant information, such as formulas. ...

Depending on whom you are writing for, you may want your footnote and endnote references to appear a specific way. Word ...

Need to fill a range of cells with the days of the week? Excel makes it easy to do so using AutoFill.

AutoFill can be a great timesaver when adding information to a worksheet. Even so, some users may not want the feature to ...

The AutoFill feature can be used for more than just incrementing information into cells. This tip explains how to access ...