Please Note: This article is written for users of the following Microsoft Excel versions: 97, 2000, 2002, and 2003. If you are using a later version (Excel 2007 or later), this tip may not work for you. For a version of this tip written specifically for later versions of Excel, click here: Controlling Sorting Order.

You can also affect sort order by indicating whether Excel should pay attention to the case of the text in your cells. If a sort is case sensitive, then items are sorted A-Z and then a-z for ascending sorts. If a sort does not pay attention to case, then uppercase and lowercase letters are treated the same.

To specify whether Excel should pay attention to case, follow these steps: 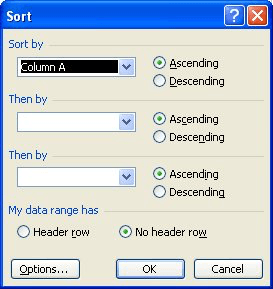 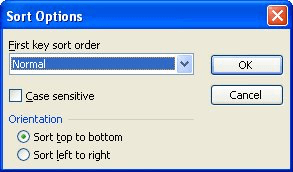 ExcelTips is your source for cost-effective Microsoft Excel training. This tip (2921) applies to Microsoft Excel 97, 2000, 2002, and 2003. You can find a version of this tip for the ribbon interface of Excel (Excel 2007 and later) here: Controlling Sorting Order.

Some fractions Word automatically converts to single characters, some it doesn't. Here's why that happens and what you ...

Need to align numbers around their decimal point within a table? It's easy to do by using the three simple steps provided ...

Selecting Columns in VBA when Cells are Merged

If you have a macro that selects different columns in a worksheet while processing information, you may get some ...

Using the sorting tools, on the toolbar, may result in some unwanted results, such as jumbled data. If this happens to ...

Too Many Formats when Sorting

Sorting is one of the basic operations done in a worksheet. If your sorting won't work and you instead get an error ...

When you sort data that contains both numbers and text, you may not get exactly the result that you expected. To know ...