Please Note: This article is written for users of the following Microsoft Excel versions: 97, 2000, 2002, and 2003. If you are using a later version (Excel 2007 or later), this tip may not work for you. For a version of this tip written specifically for later versions of Excel, click here: Choosing Direction after Enter On a Workbook Basis.

Choosing Direction after Enter On a Workbook Basis

When you press Enter after typing information into a cell, Excel normally saves your information and then moves to the next cell beneath the one where you pressed Enter. You can modify this behavior, however: 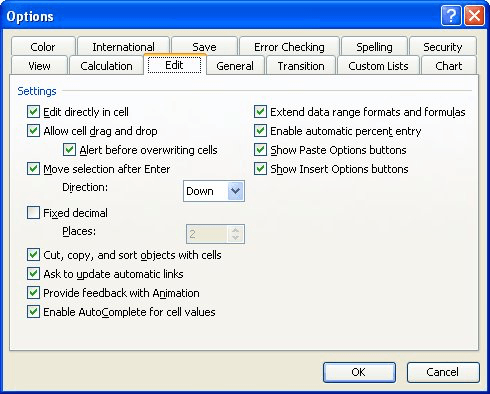 Figure 1. The Edit tab of the Options dialog box.

If you have a need to vary the Enter key behavior on a workbook-by-workbook basis, you might think you are out of luck. You can, however, use a little creative macro code to specify which direction you want to go after Enter, and have that code run whenever a workbook is activated.

There are two separate subroutines here. The first one runs whenever the window for the workbook is activated. In this case, it stores the settings associated with the MoveAfterReturn and MoveAfterReturnDirection properties into variables. (You will learn about these variables shortly.) The macro then sets the MoveAfterReturn property to True and sets the direction to xlUp. If you want to go a different direction by default in this particular workbook, simply use a different Excel constant, such as xlDown, xlToLeft, or xlToRight.

The two variables used in these routines, lMoveDirection and bMove, need to be defined in the declaration portion of any module. This allows the variables to be accessed from both of the above routines.

ExcelTips is your source for cost-effective Microsoft Excel training. This tip (2073) applies to Microsoft Excel 97, 2000, 2002, and 2003. You can find a version of this tip for the ribbon interface of Excel (Excel 2007 and later) here: Choosing Direction after Enter On a Workbook Basis.

When upgrading from Word 2000 to 2002, many people have a problem with the Ruler function. This tip explains how to fix ...

When you create a PivotTable, Excel automatically sums the data that you place into the Data Items area of the table. ...

Need to move a chart legend to a different place on the chart? It's easy to do using the mouse, as described in this tip.

Using Go To to Jump to a Chart Sheet

Create a chart on its own worksheet, and you can display it by simply clicking the tab at the bottom of the Excel work ...

Jumping to the Real Last Cell

Jumping to the last cell in a worksheet should be easy, but you may not always get the results that you expect. This tip ...

Removing Cells from a Selected Range

Select a large range of cells and you may later want to remove a few cells from that selection. This is not as easy as ...