Please Note: This article is written for users of the following Microsoft Excel versions: 97, 2000, 2002, and 2003. If you are using a later version (Excel 2007 or later), this tip may not work for you. For a version of this tip written specifically for later versions of Excel, click here: Getting Rid of Leading Zeros in a Number Format.

Getting Rid of Leading Zeros in a Number Format

If you want to get rid of the leading zeros, then you need to rely upon a custom format. This is rather easy to create; just follow these steps: 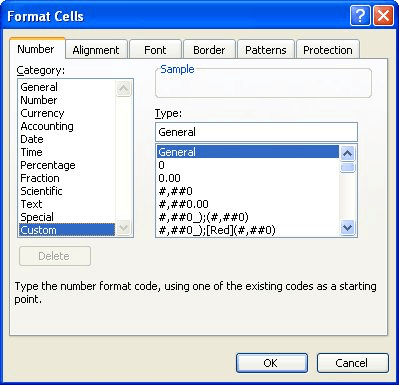 Second, if the value you enter into the cell has fewer than three digits to the right of the decimal place, then only the number of digits required will be displayed. Thus, if you have multiple cells formatted this way, it is very possible for the numbers to not "line up" along the decimal point. The solution to this is to change the format to something that will always display the same number of digits after the decimal point. A good choice is, in step 5, use the format ".000" (without the quote marks). This format will always display three digits after the decimal point, adding zeros to the end of the value, if necessary.

You could also change the format a bit if you want things to line up on the decimal point, but you don't want any trailing zeros. Try replacing the hash marks (#) in the custom format in step 5 with question marks. Thus, you would use ".???" instead of ".###". This results in up to three digits being displayed, but if there are fewer than three digits the remaining question marks are replaced with spaces.

Fourth, if you enter 0 in the cell, it won't be displayed at all. Instead you get a single decimal point in the cell and nothing else. The way around this problem is to make your custom format just a bit more complex. In step 5, above, enter the following as the custom format:

This custom format indicates that a 0 value should be shown as 0, any value less than 1 should be shown with no leading zero and three digits to the right of the decimal point, and anything else should be displayed using the General format.

ExcelTips is your source for cost-effective Microsoft Excel training. This tip (10029) applies to Microsoft Excel 97, 2000, 2002, and 2003. You can find a version of this tip for the ribbon interface of Excel (Excel 2007 and later) here: Getting Rid of Leading Zeros in a Number Format.

When laying out your document, you may wonder what width you should use for your text. An old typographers trick may help ...

If you open a workbook and find that the width of some of your columns has been changed, the discovery can be ...

Keeping an Image Centered in a Table Cell

Tables are often used in Word documents to help with page layout. This may lead you to inserting images within the cells ...

Professional typesetting has, in many ways, spoiled us. One way this is evident is in the preference we show for making ...

Excel's conditional formatting feature allows you to create formats that are based on a wide variety of criteria. If you ...

When you format a date in a specific manner, you may be surprised to see that the format changes when you open the ...

As always, this is not only good advice, but also educative, since you also add remarks that put things in perspective. I feel a bit guilty because I've used your advice so often, but never bought a book of yours yet. As a little compensation, maybe I can expand on your answer.