Please Note: This article is written for users of the following Microsoft Excel versions: 97, 2000, 2002, and 2003. If you are using a later version (Excel 2007 or later), this tip may not work for you. For a version of this tip written specifically for later versions of Excel, click here: Determining Your Version of Excel.

Determining Your Version of Excel

The instructions for some of the tips you see featured in ExcelTips vary depending on the version of Excel you are using. If you are a relative newcomer to Excel, you may not know exactly how to determine which version you are using.

There are a couple of ways you can figure out which version you are using. The first is to watch Excel as you start the program. Depending on the speed of your system, you may notice the version in the splash screen that appears as Excel starts up. (I say that this depends on the speed of your system because I've seen some systems that are so fast, the splash screen is gone before anyone can fully see everything that is on it.) 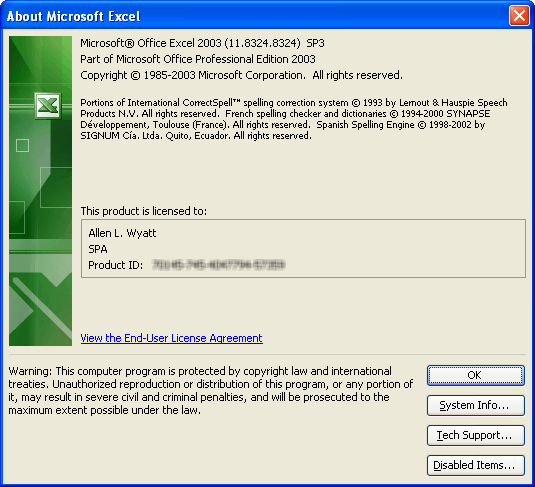 Note that near the top of the dialog box you can see the version number you are using. When you are through reviewing the information, click OK to close the dialog box.

You can also use a single-line macro that will show you your Excel version:

ExcelTips is your source for cost-effective Microsoft Excel training. This tip (2959) applies to Microsoft Excel 97, 2000, 2002, and 2003. You can find a version of this tip for the ribbon interface of Excel (Excel 2007 and later) here: Determining Your Version of Excel.

Choosing What You See in the Equation Editor

Creating a Center Across Selection Button

The ability to center text across a range of cells has long been a staple of experienced Excel users. Here's how to ...

Tap the Insert key and you can start overwriting information already in a cell. If you don't want to do this, one way to ...

Trying to calculate how much people owe you? If you charge interest or service charges on past-due accounts, there are a ...

Floating Information in a Frozen Row

You can freeze information in rows or columns using one of the built-in features of Excel. As you move up or down in the ...

Unlike some other programs (like Word), Excel doesn't provide a way for you to embed fonts in a workbook. Here's a ...