Please Note: This article is written for users of the following Microsoft Excel versions: 97, 2000, 2002, and 2003. If you are using a later version (Excel 2007 or later), this tip may not work for you. For a version of this tip written specifically for later versions of Excel, click here: Excel Charts in PowerPoint.

This poses a couple of problems. First, unless the PowerPoint file has been password protected (not really an option for mass distribution) a user could easily adjust the data feeding into the chart and corrupt accuracy.

One simple solution is to modify how the pasting into PowerPoint is done. Follow these steps: 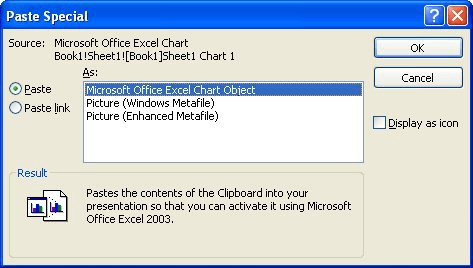 This time, only the image of the chart is pasted into the slide. This maintains the accuracy and security of your chart and significantly reduces the size of your PowerPoint presentation.

ExcelTips is your source for cost-effective Microsoft Excel training. This tip (2882) applies to Microsoft Excel 97, 2000, 2002, and 2003. You can find a version of this tip for the ribbon interface of Excel (Excel 2007 and later) here: Excel Charts in PowerPoint.

Excel can make backups whenever you save your workbook. If you want to turn the feature on or off, this tip explains how ...

ISBN numbers are used to denote a unique identifier for a published book. If you remove the dashes included in an ISBN, ...

Limiting Number of Characters in a Cell

Need to limit the number of characters that can be entered into a cell? One easy way to do it is through the use of Data ...

Snapshots of Excel Worksheets for PowerPoint

If you need to get lots of information from Excel to PowerPoint, the task can be daunting. This tip explains different ...