Please Note: This article is written for users of the following Microsoft Excel versions: 97, 2000, 2002, and 2003. If you are using a later version (Excel 2007 or later), this tip may not work for you. For a version of this tip written specifically for later versions of Excel, click here: Using Subtotals and Totals.

The first approach is to place your various subtotals, as desired. Then, when it comes time to place your totals, simply use a modified SUM formula. For instance, if you want to get a total for the range F10:F32, and there are subtotals interspersed in the column, you would use this formula for your total:

This works because the addition of the subtotals simply doubles the real value of the column. The second way is to use the familiar AutoSum feature of Excel, accessible through the toolbar. Insert your subtotals as normal in the column. When you are ready to add your total, select all the cells you want to total, as well as the cell where your total will appear. So if you want a total for the range B3:B20 (which includes some subtotals), and you want the total to appear in B21, select cells B3 through B21. Then click on the AutoSum tool. The total inserted by Excel in cell B21 is the sum of all the subtotals in the column.

If you are using a well-defined data table (headings, multiple columns, etc.), then you may also want to use the built-in subtotals feature of Excel. This works particularly well if you need subtotals based on a change in a particular column value. For instance, you may have a table that lists products in one column, quantities in another, and values in another. You can insert subtotals and totals for this table by following these steps: 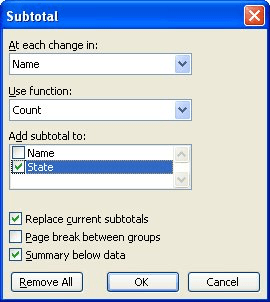 ExcelTips is your source for cost-effective Microsoft Excel training. This tip (2749) applies to Microsoft Excel 97, 2000, 2002, and 2003. You can find a version of this tip for the ribbon interface of Excel (Excel 2007 and later) here: Using Subtotals and Totals.

Different style guides describe different ways of formatting information that appears in a document. One such style guide ...

There are several ways you can create PDFs from your Word documents. When doing so, not everything in the Word document ...

Endnotes in a Separate Document

When you add endnotes to a document they are normally positioned (as one would expect) at the end of the document. You ...

If you have added subtotals to your worksheet data, you might want to copy those subtotals somewhere else. This is easy ...

When you add subtotals to a worksheet, Excel typically places them in the same column that you are subtotaling. If you ...

Page breaks not appearing where you expect them in your subtotaled data? It could be because of a setting you made in ...