Please Note: This article is written for users of the following Microsoft Excel versions: 97, 2000, 2002, and 2003. If you are using a later version (Excel 2007 or later), this tip may not work for you. For a version of this tip written specifically for later versions of Excel, click here: Jumping to Alphabetic Worksheets.

If you have a workbook containing quite a few worksheets, you may be looking for an easier way to jump to a specific group of worksheets, rather than use the scrolling arrows near the worksheet tabs. For instance, you might want to enter a single letter and have Excel display the first worksheet that begins with that letter. There is a way to do this directly within Excel. Simply follow these steps: 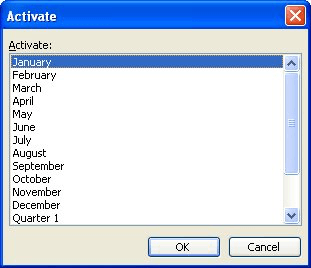 The interesting thing about this approach is that you don't need to have the worksheets in alphabetical order to use it. Each time you press a letter (steps 3 and 4), Excel selects the next worksheet that begins with that letter.

While this approach is pretty fast to use, some people may object because it involves the use of both the mouse (two clicks) and the keyboard. Some people prefer to strictly use the keyboard. In this case, it is best if you sort your worksheets alphabetically (as covered in other issues of ExcelTips) and then use a macro to pull up the desired worksheet area. The following macro will do the trick:

Now, assign a shortcut key to the macro, such as Ctrl+G. From now on, you can simply press Ctrl+G, type a letter, and then press Enter. The first worksheet that starts with the letter you specified is selected.

A final solution is to create your own "index" or "TOC" to your worksheets. Insert a blank worksheet at the beginning of the workbook, then add hyperlinks to the various other worksheets in your workbook. Someone could click on the hyperlink, which would then display the worksheet referenced by the hyperlink.

Setting up hyperlinks in this manner is definitely more work, but it does have advantages not offered by the other methods described so far. First, users don't need to know the worksheet name at all. Second, you can use multiple "keywords" as links, each leading to the same worksheet. In this way the overall workbook becomes more accessible to different users. Finally, the sheets can be in any order desired, instead of putting them in alphabetical order.

ExcelTips is your source for cost-effective Microsoft Excel training. This tip (2718) applies to Microsoft Excel 97, 2000, 2002, and 2003. You can find a version of this tip for the ribbon interface of Excel (Excel 2007 and later) here: Jumping to Alphabetic Worksheets.

When automatically capitalizing the beginning of sentences, Word relies on how you historically have done your typing. ...

The resolution at which Word compresses graphics in a document may be bothersome. If it is, your options are very ...

When writing a macro, a common task is the need to compare two strings. You can do this by "normalizing" the strings, as ...

Combining Worksheets from Many Workbooks

Do you need to pull a particular worksheet out of a group of workbooks and combine those worksheets into a different ...

Need to know the name of the current worksheet? You can use the CELL function as the basis for finding this information ...