Please Note: This article is written for users of the following Microsoft Excel versions: 97, 2000, 2002, and 2003. If you are using a later version (Excel 2007 or later), this tip may not work for you. For a version of this tip written specifically for later versions of Excel, click here: Converting Forced Text to Numbers.

When you enter information in a worksheet, Excel does its best to decipher what type of data you are entering. If your entry can be translated as a number or a date, then Excel treats it that way. You can overcome this natural tendency of Excel by formatting a cell as text before entering information in it. When you do, the information in the cell is always treated as text.

Of course, forcing Excel to treat your input as text can have unwanted repercussions later. For instance, you may decide that you want to add up the contents of cells that are formatted as text. If you use a formula such as the following, then Excel has no problem:

It is possible to remove the text formatting attribute from the cells you want to sum, but that won't cause Excel to reassess the contents of the cells and treat them as numbers or dates, where appropriate. There are several different ways you can force the conversion of forced text into numeric values, ranging from macros to using formulas in other columns to perform the conversion. The following two solutions, however, seem to be the easiest and quickest.

The first method is accomplished by following these steps: 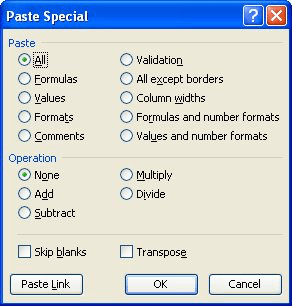 This works because Excel multiples each cell in the range (step 3) by the value in the Clipboard and then again stores the value in the cell. Since any number multiplied by one is that same number, you effectively force Excel to replace the contents of the cell with the numerical equivalent of the text that was previously there.

If the range you want to convert contains only numbers formatted as text and not any actual text, then the following steps work well: 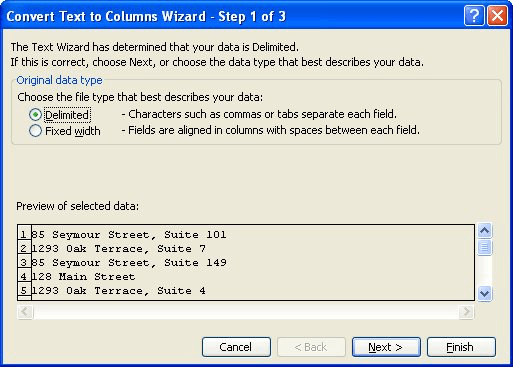 If you try these three steps on a range of cells that has text containing spaces or tabs, it is possible that you could overwrite data in columns to the right of the selected range. That is why it is safest to use if the range only contains numeric values formatted as text.

ExcelTips is your source for cost-effective Microsoft Excel training. This tip (2670) applies to Microsoft Excel 97, 2000, 2002, and 2003. You can find a version of this tip for the ribbon interface of Excel (Excel 2007 and later) here: Converting Forced Text to Numbers.

Need to keep notes about a document, but you don't want others to see those notes either on-screen or on-paper? Here's an ...

If you have a document that contains optional hyphens (special characters that mark where a word can be split between ...

When dealing with files containing comma-separated values, you want to make sure that what gets imported into Excel ...

Excel provides a couple of different ways to copy formatting from one cell to another. Perhaps the easiest way is to use ...

Creating a Center Across Selection Button

The ability to center text across a range of cells has long been a staple of experienced Excel users. Here's how to ...

Have you ever been using a workbook, only to open it one day and find that Excel has changed the height of your rows or ...

Big thank you for this tip! You saved me a ton of time - hats off!

Wow, thank you SO much. Exporting reports from Quickbooks Online to Excel resulted in all of the data being recognized as text. It was so frustrating, but using your "Paste Special" - "Multiply" tip worked well and saved me so much time. Thank you!

This quick solution really bailed me out, Thank you!

genius - this is the only think that worked! (multiply by 1)

literally nothing works. i've tried all these steps i cant get the error to show its not a number the text to columns does nothing, the paste special multiple does nothing...

Thank you! This really helped...