Please Note: This article is written for users of the following Microsoft Excel versions: 97, 2000, 2002, and 2003. If you are using a later version (Excel 2007 or later), this tip may not work for you. For a version of this tip written specifically for later versions of Excel, click here: Getting Rid of Negative Zero Amounts.

Getting Rid of Negative Zero Amounts

When you are creating a worksheet, and you format your cells to display information just the way you want, you may notice that you end up with "negative zero" amounts. Everyone learned in math classes that zero is not a negative number. So why does Excel show some zero amounts as negative?

The reason is because your formatting may call for displaying less information than Excel uses internally for its calculations. For instance, Excel keeps track of numbers out to fifteen decimal places. If your display only shows two decimal places, it is possible that a calculated value could be very small, and when rounded show as zero. If the calculated value is something like –0.000001325, then the value would show with only two digits to the right of the decimal point as –0.00. The negative sign shows, of course, because the internal value maintained by Excel is below zero.

There are a couple of ways you can solve this problem. The first is to simply round the calculated value to the desired number of decimal places. For instance, assume that this is your normal formula—the one that results in the "negative zero" values:

You can round the value in the cell by simply using the following formula instead:

This usage results in the value being rounded to two decimal places. In this way you should never end up with another "negative zero" value.

Another solution preferred by some people is to force Excel to use the same internal precision as what you have displayed in your worksheet. Just follow these steps: 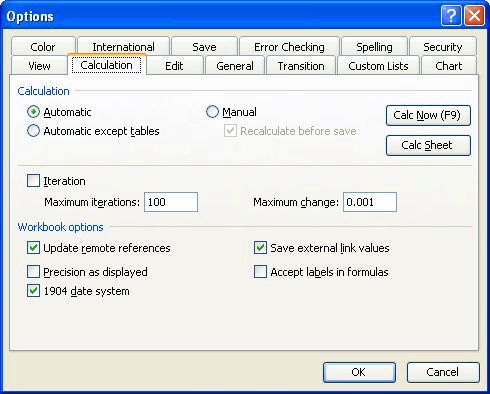 ExcelTips is your source for cost-effective Microsoft Excel training. This tip (2576) applies to Microsoft Excel 97, 2000, 2002, and 2003. You can find a version of this tip for the ribbon interface of Excel (Excel 2007 and later) here: Getting Rid of Negative Zero Amounts.

Space after a Table

Those familiar with styles are used to setting vertical spacing before or after paragraphs. You can get just the look you ...

Excel 2016 PivotTables for the Faint of Heart (Table of Contents)

PivotTables are a powerful tool for consolidating huge amounts of data. PivotTables 2016 for the Faint of Heart ...

Spell-Checking in a Protected Worksheet

When you protect a worksheet, you can't use some tools, including the spell-checker. If you want to use it, you must ...

A handy way to store latitude and longitude values in Excel is to treat them as regular time values. When it comes around ...

Better Use of Heading Space

If your column headings are too large to work well in your worksheet, why not turn them a bit? Here's how.

Conditional formatting does not allow you to change the typeface and font size used in a cell. You can write your own ...