Please Note: This article is written for users of the following Microsoft Excel versions: 97, 2000, and 2003. If you are using a later version (Excel 2007 or later), this tip may not work for you. For a version of this tip written specifically for later versions of Excel, click here: Unbreakable Formula References to Worksheets.

First of all, it should be said that this behavior (as described) is not normal for Excel. If you are in the Overview Report worksheet and you create a formula that references a cell on the September Data worksheet, then any changes to the name of the September Data worksheet should be automatically reflected in the formulas in any other worksheets in the workbook. The only time this isn't the case is if you have a formula that uses the INDIRECT function to reference something on the worksheet, as exampled here:

The reason it doesn't change is because the worksheet name is contained within single quote marks (apostrophes), meaning it is viewed as a string constant that should not be changed. If you need to use INDIRECT, then place the worksheet name off in some other cell and reference that cell in the INDIRECT formula, as described in other issues of ExcelTips. You can then change the contents of the referenced cell to reflect the name of the worksheet you want to use.

If you don't want to change your formulas in this way, then you can use Find and Replace to change the references after you rename the September Data worksheet. Follow these steps: 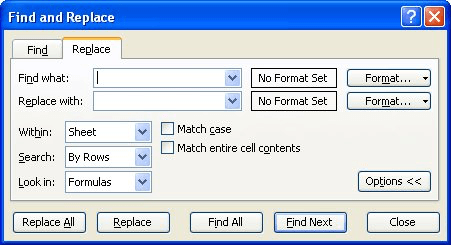 Figure 1. The Replace tab of the Find and Replace dialog box.

Another option that works well is to simply define named ranges in the September Data worksheet. Each cell (or range of cells) should be assigned a name that you can then use in formulas on other worksheets. Any changes to the worksheet name will not affect the use of the named ranges at all.

Finally, you could consider looking at your data layout. For instance, you might be better off to not have a worksheet named "September Data." Instead, create a worksheet named "Current Month" and reference it in your formulas. When the start of a new month rolls around, copy the data from the Current Month worksheet and archive it in a new worksheet that bears the name of the month it represents (such as "September Data"). This way you're always working with the current data and have the older months' data available for review at any time you need.

ExcelTips is your source for cost-effective Microsoft Excel training. This tip (10811) applies to Microsoft Excel 97, 2000, and 2003. You can find a version of this tip for the ribbon interface of Excel (Excel 2007 and later) here: Unbreakable Formula References to Worksheets.

If you've defined a variety of scenarios for your workbook, Excel can provide a handy way to compare the effects of those ...

Grab some info from a source other than Excel, and you may find the need to delete a certain pattern of rows from a ...

Endnotes are indispensable in some types of writing. You may want to create endnotes, however, that don't follow the ...

Setting the Number of Default Worksheets

Excel allows the user to determine how many default worksheets are in a new workbook.

Detecting Types of Sheets in VBA

When processing workbook information in a macro, you may need to step through each worksheet to make some sort of ...