Please Note: This article is written for users of the following Microsoft Excel versions: 97, 2000, 2002, and 2003. If you are using a later version (Excel 2007 or later), this tip may not work for you. For a version of this tip written specifically for later versions of Excel, click here: Using WordArt in Excel.

WordArt is a program that allows you to treat text as a graphic. You can use the program to add special effects and flourishes to text, and then insert the text—as a graphic—in your worksheet. It is useful for creating special text elements such as logos, mastheads, or titles. Don't confuse the program name (WordArt) with Microsoft Word; these are two entirely different programs, and you can use WordArt with Excel as easily as you can use it with Word.

How you access WordArt depends on the version of Excel you are using. Excel 97 includes WordArt 2.0, although it is not automatically installed when you install Word. You can tell if WordArt is installed by trying to access WordArt. If it is not installed, then you can run the Excel Setup program again and install WordArt on your system.

You access WordArt using either of these methods in Excel 97:

When WordArt is running, you see the WordArt dialog box, and most of your Excel 97 menus and toolbars are hidden. When you are through using WordArt, you can exit the program simply by using the mouse to click somewhere else in your worksheet. (You can also press Esc to exit WordArt.)

Excel 2000 and later versions include a more integrated approach to WordArt. Follow these steps: 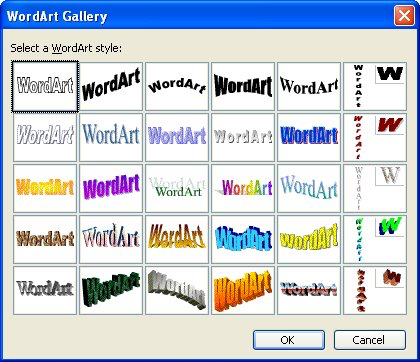 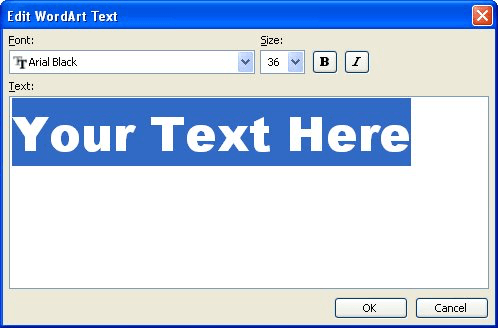 At this point, the WordArt graphic is created and added to your worksheet. You should also see the WordArt toolbar, which includes commands specific to working with WordArt objects. To hide the toolbar, simply click a different place in your document, so that the WordArt object isn't selected.

ExcelTips is your source for cost-effective Microsoft Excel training. This tip (3408) applies to Microsoft Excel 97, 2000, 2002, and 2003. You can find a version of this tip for the ribbon interface of Excel (Excel 2007 and later) here: Using WordArt in Excel.

Forcing the Date to the Next Wednesday

Working with today's date in Word is easy. Trying to manipulate dates to come up with a future one can be an entirely ...

Getting Rid of Variant Styles

If you use the Styles task pane, you may have noticed that it can list more than just styles. It also lists variants of ...

Calculating the Interval between Occurrences

With a long list of items in a worksheet, you may want to determine the last time a particular item appeared in the list. ...

Specifying a Font in WordArt

Do you use WordArt to place graphics in your Excel workbooks? If so, you may want to modify the font used by the program ...