Please Note: This article is written for users of the following Microsoft Excel versions: 97, 2000, 2002, and 2003. If you are using a later version (Excel 2007 or later), this tip may not work for you. For a version of this tip written specifically for later versions of Excel, click here: AutoFill with Random Numbers.

Excel includes a feature that allows you to automatically fill a range of cells with information you have placed in just a few cells. For instance, you could enter the value 1 in a cell, and then 2 in the cell just beneath it. If you then select the two cells and drag the small black handle at the bottom right corner of the selection, you can fill any number of cells with incrementing numbers. This AutoFill feature sure beats having to type in all the values!

You may wonder if there is a similar way to use the AutoFill feature to place random numbers in a range. Unfortunately, the AutoFill feature was never meant for random numbers. Why? Because AutoFill uses predictive calculations to determine what to enter into a range of cells. For example, if you entered 1 into one cell and 5 into the next, highlighted the cells and then used AutoFill, the next number entered in the cell below would be 9 because Excel can deduce that the increment is 4. It is a constant increment that can be predicted.

Random numbers on the other hand are, well, random. By nature they cannot be predicted, else they wouldn't be random. Therefore the predictive nature of AutoFill cannot be applied to random numbers.

However, there are ways around this. One is to simply use the various formulas (using RAND and RANDBETWEEN) that have already been adequately covered in other issues of ExcelTips. These formulas can quickly and easily be copied over a range of cells, using a variety of copying techniques.

Another approach is to use a feature of the Analysis ToolPak which makes putting random numbers into a range of cells pretty easy. Just follow these steps: 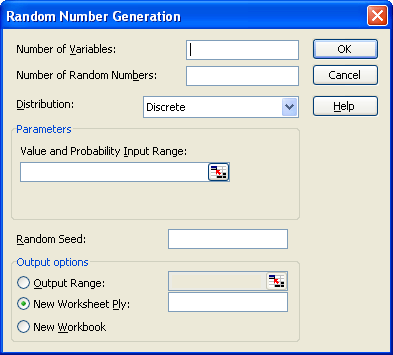 ExcelTips is your source for cost-effective Microsoft Excel training. This tip (2964) applies to Microsoft Excel 97, 2000, 2002, and 2003. You can find a version of this tip for the ribbon interface of Excel (Excel 2007 and later) here: AutoFill with Random Numbers.

Need to sum up different ranges of cells? One of the tools you can use is the handy SUBTOTAL function, described in this tip.

You can spice up your bar chart by using a graphic, of your choosing, to construct the bars. This tip shows how easy it ...

Printing Comments from a Macro

Need to print the comments you've added to a document? You can do it manually or you can have your macro do the printing. ...

Random values are often needed when working with certain types of data. When you need to generate a random value in a ...

Random Numbers in a Range

Excel provides several different functions that you can use to generate random numbers. One of the most useful is the ...

It is not unusual to need to select two random items from a list. There are a couple of ways you can approach the task; ...

Nice note ... unfortunately it suffers from the same problem as the associated Microsoft Help file: not a word on how to actually use this tool. I filled in blanks, added columns but to no avail. No matter what I did it complained that something was not right, as Madeleine would say. LOL

I dislike the Excel RAND function as it is very difficult to debug.

Instead, I prefer to copy in a table of values (range of cells) from an existing set of non-changing random numbers.

One good, free set of values that you can easily find called "100,000 Random Normal Deviates" (I love the name) published by the Rand Corp in the 1950's. It's stood the test of time.

With a minimal effort, you'll easily find tables for uniform and other distributions.