Please Note: This article is written for users of the following Microsoft Excel versions: 97, 2000, 2002, and 2003. If you are using a later version (Excel 2007 or later), this tip may not work for you. For a version of this tip written specifically for later versions of Excel, click here: Turning Off Capital Corrections.

Excel often tries to compensate for your shortcomings as a typist. For instance, as you are typing along, if you type a word where the first two letters are uppercase, and the next letter is lowercase, Excel figures you just have slow fingers and didn't release the Shift key in time to make the second letter lowercase. So, it dutifully changes the second letter to lowercase to help you out.

There are some situations where this behavior can be bothersome, however. For instance, you may have a company or product name in which the first two letters are always capitalized, such as INtec or MYphone. In these cases, Excel also tries to do its magic and change the capitalization.

One solution to this problem is to turn off the correction that Excel does to your words. (At least for this particular capitalization issue.) The way you do that is as follows: 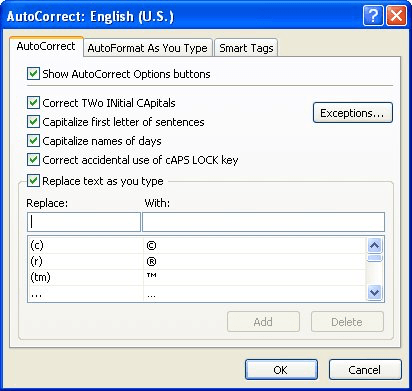 ExcelTips is your source for cost-effective Microsoft Excel training. This tip (2753) applies to Microsoft Excel 97, 2000, 2002, and 2003. You can find a version of this tip for the ribbon interface of Excel (Excel 2007 and later) here: Turning Off Capital Corrections.

Searching Through Many Workbooks

If you have a folder that contains dozens or hundreds of workbooks, you may need to search through those workbooks to ...

Thin spaces are a typographic device that allows you add a bit of space between elements of a document. There are no thin ...

Backing Up Your AutoCorrect Entries

Want to protect the information that you may be stored in your AutoCorrect entries? Just find a special type of file on ...

The AutoCorrect feature in Excel is a great tool for quickly entering information. Here's an explanation of the feature ...

The AutoCorrect feature in Excel can change some of your data in ways you don't like. If you discover this is happening, ...