Want to try an experiment? Enter something in a cell, but make sure that you start a new line somewhere within the cell. For instance, enter 123 then press Alt+Enter and press 456. You should see two lines within the cell, with three digits on each line. Now, in another cell, put a simple formula that references the first cell, as in =A7.

What happened after you entered the formula? The results of the formula should not look the same as what you typed in the first cell. Instead of being on two lines, the contents should be on one line, separated by a small, rectangular box. (See Figure 1.) 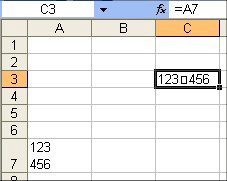 It is interesting to note that this experiment works because when you press Alt+Enter to put in your first cell's value, Excel automatically turns on text wrapping for the cell. You can verify this by selecting the cell and choosing Format | Cells | Alignment tab (pay attention to the Wrap Text check box). When you used the formula, however, the cell into which the results were copied did not have this attribute turned on, so the character created by Alt+Enter was displayed as a text character instead of controlling wrapping.

Changing the Color of a Tab's Leader Character

When you set tab stops for a paragraph, you can also specify leader characters to be used with the tab stop. If you want ...

If you go to print a document and find out that your quotation marks aren't printing properly, there could be a number of ...

Moving the Insertion Point to the Beginning of a Line

If you need to move the insertion point within your macro, then you'll want to note the HomeKey method, described in this ...

Filling References to Another Workbook

When you create references to cells in other workbooks, Excel, by default, makes the references absolute. This makes it ...

Changing the Reference in a Named Range

Define a named range today and you may want to change the definition at some future point. It's rather easy to do, as ...

If you define your named ranges after you create your formulas, you can have Excel update those formulas to reflect the ...

I do NOT see a small black box in the formula cell, all I see is 123456, so one cannot see that the text is in two parts.

However turning on Text Wrapping does put it onto 2 lines.